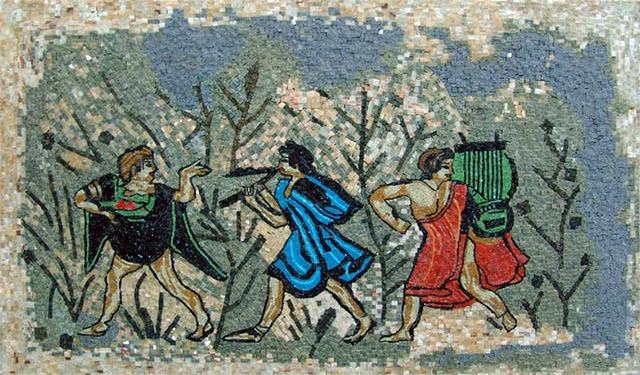 As the months of the year roll towards their end and we are cook the last of the annual harvest – sharp onions, winter squash, eggplant (ah, the moussaka!)—and drink the new wines of the varietals, it’s fun to take a look at what Greeks in villages used to call the months of the year, long before the meaningless “May” and hollow “November.” The names tell the story of the yearly round of agriculture and as you will see they are very “cultivated.”

The name of January is Gennaris, from “to give birth,” the month that sheep and goats drop their lambs and kids. February is Flevaris, like “veins” and means the running of the sap. March was called Anoiksiatis, meaning “the opening.” April is Vrohi, “the rain.” May had several names, Kerasaris, “cherry,” Triandafilas, “rose,” and Louloudas, “flowers.” It’s the month the hills are covered with blossoms. June is Theristis, “the harvest,” for it’s the month wheat and barley are reaped. July is Alonaris, which means, “the threshing,” when the rich kernels of the grains are separated from the now-dry shaft. August, and sometimes September, is called Trigos for the grape culling and wine pressing. September is otherwise called Stavros for the festival of the Holy Cross. October has several names, Pyanopsia, the term for harvesting the “aspria,” or all the legumes, which can be eaten fresh and dried for winter. It is also close to the word for “germinating,” or the re-starting of plants. Lots of festivals celebrating huge cauldrons of broad beans and chickpeas took place. November was dubbed Sporias, referring to the sowing of seeds. It was also called Krasominas and Trigominas, for forty days after pressing the grapes have now passed and the barrels of new wine can be opened. December bore many names all starting with the word Sitari, “wheat,” for in December the fall sown winter wheat is planted in the ground to be harvested in June, threshed in July, ground in mills and mortars, kneaded into loafs, baked in hive ovens, and placed on our tables as life sustaining bread.

Hi, I’m Susanna Hoffman, author of The Olive and The Caper: Adventures in Greek Cooking and numerous articles of the cuisines and history of food in Greece. I’ll be contributing recipes, stories, legends, annals about Greek food for the newsletter every month. Please look for “Susanna’s Corner” and prepare to get ravenous.

We're two Greek sisters who love to cook and create!